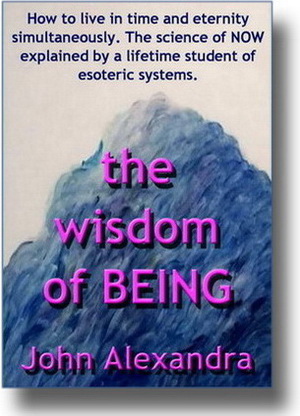 The Wisdom of Being reveals the truth concealed behind the techniques called 'mindfulness' or 'self-awareness'.

This book takes you far beyond the conventional view of spirituality to reveal the hidden core behind Buddhism, Vedanta, Sufism, Christianity, Taoism, the Gurdjieff Work, Vedanta and Zen...

Most religions tell you what to do but not how. This is because, over the ages, the inner knowledge they once had has been forgotten, distorted or dumbed down until only rituals and irrational beliefs remain.
John Alexandra strips the obfuscation from traditional sources of spiritual insight. He uses two esoteric systems - the Gurdjieff Work and Zen - to open the frontiers to unitary knowledge in a profoundly simple way. Here you'll find a place to begin - unvarnished, practical advice about self-awareness and the inner path.

John Alexandra, has studied with both the Zen and Gurdjieff traditions and is an expert on the occult and comparative religion. His book is an attempt to de-mythologize approaches to self-awareness and self-transformation and reveal the inner core of authentic systems of self-mastery. (50,000 words)

'There is no solution. Because there is no problem.'
Marcel Duchamp

'Why do you prate of God? Don't you know that whatever you say of him is untrue?'
Meister Eckhart

It can take a lifetime to understand that little - to realize a few simple things.
What is the nature of reality? And can it be directly known? Through the ages, mystics have said that it can. Although their experiences are identical, because Unity is one, their expressions for it are myriad, because truth can't be defined in words. And so all such expressions attempt to describe the same thing.
The Cloud of Unknowing.
The Unmoved Mover who moves all things.
The Void.
The Silence.
The Stillness.
The Original Face.
The Absolute.
The Great Mind.
The Now.
Intrinsic Being.
The I AM...
And can we flawed, undisciplined beings ever aspire to know this thing - not philosophically but organically. Can we know it with certainty - as fact?
Through the ages, there are always people who preserve the approach to unitive knowledge - people in touch with more than philosophy or belief. But even if we can find them, we won't understand them. Because, without a long and difficult apprenticeship, truth appears as stupidity or paradox. For instance:

'Passing away is the essence of abiding.'

Or: 'Eternity is no other than this instant.'

To a rational mind, this is nonsense because rationality is too blunt an instrument to receive such perceptions, even if we are as brilliant as Heidegger, who came up with the interesting question: 'Why is there anything, rather than nothing?'
'The real is simple,' we were told. 'It is you who are complicated.'
How, then, can the complex understand the profoundly simple?
While great spiritual traditions remain as fixtures in time, their beliefs are passed down in increasingly distorted forms. And belief, at best, is a comfort or defence - not a fact.
Inevitably, the techniques of their founders enter the marketplace - mostly in a form so warped or weakened that they do little but mislead.
Many Masters have declared that, three generations from the source, distortions and ignorance are assured. When the outer aspect of a revelation, degraded to mere information, filters into general life it becomes useless for serious study.
Zen, Taoist and Vedantic sages had no time for belief, only facts. And to wake people from the dream we call our lives, they used practical means - such as self-inquiry and the study of attention. You'll find the pith of their methods here. All a genuine teacher can do is try to get people to see what is in them. But to see ourselves is the thing we cannot face.
Robbie Burns put it aptly:

'O wad some Power the giftie gie us,
To see oursels as ithers see us.
It wad frae mony a blunder free us,
An' foolish notion.'

We cannot see ourselves without the image unless we have a science of Being. Yet even in places where such knowledge is preserved, most students remain followers, staring up at their gurus or down at their books without perceiving what is in front of them. And if, by chance, they discover a shred of truth, they preserve it like a pressed flower - to comfort themselves or feel special, instead of discarding it and going on.
Because the price of contacting reality is everything we are or possess.
We were taught that we need to recreate what we have learned - that to parrot it verbatim shows little has been understood. To effectively transmit anything one needs to BE what one knows. Unless a teaching is embodied it cannot effectively be passed on, as the understanding is unitive - not mental but organic. As the Baul, Shri Anirvan, beautifully said: 'One must know how to make use of the force and grandeur of philosophy, but in the heart, know how to feed oneself on radiant beauty alone.'
So can this body - this organ of perception - connect directly with the universe? Is something so outlandish possible?
This book attempts to be a touchstone. But that doesn't make it accessible.
Still, as inner teachings spread like pollen across the West and certain concepts become more available, if you have assimilated some of them you could find direction here.
What follows is based on a lifetime of work in esoteric groups. Specific advice is omitted because it relies on oral transmission.

'This book carries a certain authority. A rare thing in this overcrowded field. Takes you beyond the popular view of "mindfulness" teachings to the essential inner techniques. Alexandra has studied with several esoteric groups and brings a lifetime of enquiry to the task. His message is austere. But perhaps those who can hear will hear.'
NEW WAVES IN WORDS

John Alexandra, has studied with both the Zen and Gurdjieff traditions and is an expert on the occult and comparative religion. His book, The Wisdom of Being, is an attempt to de-mythologize approaches to self-awareness and self-transformation and reveal the inner core of authentic systems of self-mastery.


Other books in this field that may interest you:

Talks With Al is an introduction to the esoteric teaching couched as a deceptively simple series of dialogues between a teenage seeker and a guru. The dictionary is written by an expert on Hermeticism.