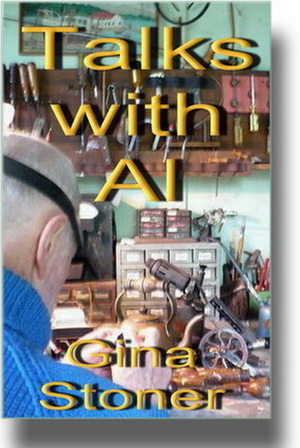 Talks With Al. Birdie is a smart kid but no match for a guru. An inspirational and logical gem.

A guide to practical living, and a coming-of-age manual like no other.

A teenage boy with typical troubles meets Al, the local handyman, who is a guru in disguise. Their unlikely relationship provides a framework for ideas and events that open the boy's mind to perspectives never mentioned at home or at school. Al's instruction starts simply enough. Then the learning curve becomes vertical!

Author, Gina Stoner, has spent her life studying occult systems of self-development and has put much of what she learned in this deceptively simple book which uses the 'young adult' format to demonstrate the approach to inner awareness. Here are challenging ideas both practical and profound. Talks With Al is a land mine. (15,500 words)

Read a chapter from Talks With Al:

THE LAW OF TWO


I take the dog to the park because I hope the girl will be there. She takes her little brother to the playground because it has slides and crap and it's fenced in.
Old Tigger's a Labrador and his back legs aren't that crash hot any more. But there's one thing he loves - chasing the ball. Except he never lets up. Throw it once and you've got the job for life.
Anyway, I get to the park and she's there, sitting on the bench outside the fence while her snotty little brother grinds himself to bits on the swings and slides and whatever.
I look across twice but she ignores me. I know she knows I'm looking at her.
Girls!
Al's there, too, sitting on a bench in his straw hat with the hole in the top. He's reading something or pretending to. But mostly looking at me.
I keep throwing the damned ball and Tigger keeps bringing it back. Finally I get jack of it and sit on the bench with Al. The mong props there too, looking up at me with the ball, all pleading eyes and slaggy chops, begging me to throw.
The girl's walking around the playground now, slowly, wiggling her hips.
Al gets the ball from the dog and throws it. Tigger bounds off.
'You've done it now,' I tell him. 'Be here all night.'
'You reckon?'
The dog pants back with the ball. Al throws it again as far as he can.
I'm still looking at the girl.
'You keen on her?' he asks.
'Sort of.'
'Looks like she doesn't want a bar of you.'
'Because she's messing with my head.'
'I know.'
He throws the ball again. The damned dog chases after it, all hair, paws and slag.
'He never gets sick of it,' I tell Al.
'Dogs are like little kids. Like repetition.' He throws the ball. 'So don't look at her.'
'What?'
'The girl. Don't look at her. Ignore her.'
'What'll that do?'
'Wait and see.'
Tigger's whacked. And when Al throws the ball next time, he looks up and pants a bit before chasing off. This time he doesn't run, just lopes. He brings the ball back only half way, then sits on the grass and gnaws it.
It's torture not to look at the girl. I want to look at her legs. And the way her hips move. And the shape of her cheek. Shitty bitch.
'Hard, isn't it,' Al says. 'Nothing worthwhile comes easy.'
The dog's wandered off. It pees on a bush, then sniffs for other doggie scents. Dogs are pretty disgusting in case you haven't noticed. At least it's not sitting here begging. I go over and bring back the ball.
'There's a law,' Al says. 'It's called The Law of Two.'
'Uh-huh.'
'It says, if you want someone to go away, you make a big fuss of them and invite them in. And if you want them to come in, you insult them and push them away.'
'Uh-huh.'
He leaves it at that.
I suppose he's right. The dog was mad for the ball but now it's bored and tired and into something else.
Shit! The girls coming back with her brother down the path. She'll pass straight in front of us.
Al watches me. 'Careful now.'
I call the dog. It's torture not to look at her. But I keep eyeballing the bloody dog like it matters more than she does. Then she's past and out the gate. Next morning, at lunch break, she stops in front of me. 'So what's got into you?'
I go, 'Like huh?'
'I'm off to the game on Saturday. But I guess you don't want to come. With me, that is?'
'I'll think about it.'
'Don't strain yourself.'
I suppose that's what they call The Language of Love!
When I tell Al, he just grins.

REVIEWS OF TALKS WITH AL:

'A teenage boy discovers that the local handyman is far more than he seems. He's actually an intimidating sage who knows more about life than any parent or teacher will ever understand. The young Sorcerer's Apprentice begins a training that upends his life.'
NEW WAVES IN WORDS

'How do you slow time? How do you attract a girl? What's beyond the universe? Was Darwin right? Al knows it all.'
MOVING FINGER REVIEW

Gina Stoner, the reclusive author of Talks With Al, has studied esoteric systems of development for much of her life. Her books reflect this, as do her seminars on self-transformation. Gina now devotes much of her time to contemplation and research.