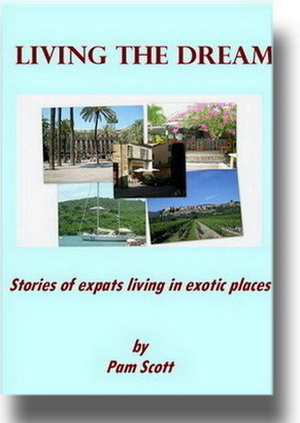 Pam Scott has lived much of her life in South East Asia. And her travel tales are fascinating.

Have you ever been on holiday and thought: 'This is the life! Wouldn't it be great to live here?'

Perhaps your dream is a tropical island in the Caribbean, or a teeming city in the mysterious East? Or your own year in Provence? Maybe you've even gone on to imagine actually walking out of your old mundane existence to exchange it for a life in some exotic location.

Usually though, the dream fades and is stored away as something you might do 'one day'. Living the Dream is about ten adventurous souls who threw caution to the wind and headed into unknown territory.

Irma moved from Finland to settle in Bangkok.


Chris went from the USA to live in Chiang Mai, and Suzanne left New Zealand for Provence.

Angelo sailed from Italy to Antigua in the Caribbean.

Susan and Mark headed across the Channel to France, and Maureen lived her dream on the waters of the Caribbean.

Each decided to create a new life for themselves in another country very different from their own, not because they had to, but because they wanted to. Read how they got on. (183pp.) PDF only.