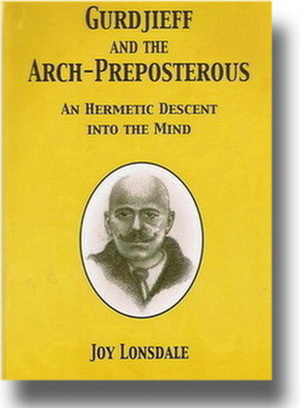 Did Gurdjieff use the Hermetic Code in his writings?

G. I. Gurdjieff was one of the most remarkable esoteric teachers of the twentieth century and his allegorical masterpiece, Beelzebub's Tales to His Grandson has attracted many interpretations. Such seminal writings, according to Joy Lonsdale, were constructed with the aid of an encipherment known as the Hermetic Code.

Joy Lonsdale believed that Gurdjieff used this code in Beelzebub's Tales and demonstrated her theory by applying it as a key to the six 'descent' chapters of that book. (126,000 words)

This study is unique because it examines Beelzebub (All & Everything) from the autobiographical standpoint. This Fourth Way book has been out of print for some years. Buzzword is not qualified to critique its interpretation but, for Gurdjieff and Ouspensky scholars, we include below the beginning of a talk about it that the author prepared for the 2000 International Humanities Conference, a peer group forum for the study of Beelzebub's Tales.


Limited art-paper paperback hard copies of this book are now available for $30. This includes postage. Order below. Then please advise us of your forwarding address at submit@buzzwordbooks.com

Read the start of the talk here:

It is my view that the writings of George Ivanovitch Gurdjieff are written in a style based upon the tradition of the Hermetic adepts of all ages who, to perpetuate their esoteric teaching, wrote their material with the assistance of a special allegorical cipher called "The Hermetic Code".  This is a blanket term for all allegory, metaphor, simile or single key words employed by such writers to indicate, and pass on to those who could understand, their knowledge of the mental process described by them as The Magnum Opus (The Great Work).  Over the years, and as knowledge grew, this Code has gradually been deciphered, and with this assistance many types of literature have yielded previously unsuspected esoteric meanings.

With the use of a working knowledge of this Code, I have endeavoured to interpret the "descent" chapters in Beelzebub's Tales to His Grandson in a book entitled "Gurdjieff and the Arch-Preposterous: An Hermetic Descent into the Mind"  but I also consider that this Hermetic Code can be applied to the whole of G's writings.  In particular, I feel it must be used to interpret the very first chapter of Beelzebub's Tales, "The Arousing of Thought", for he tells us himself that this "should be the preface for everything further".  In light of this, and with the kind co-operation of Mr Sy Ginsburg to act as reader in my absence, I wish to present this paper to the Conference.

In the beginning of "The Arousing of Thought", Gurdjieff makes an "utterance" in conformity with the Christian Trinity, saying that he does so with "a full wholly-manifested-intonation" and goes on to describe the nature of this intonation.  He takes confidence in this outward utterance, saying he could now be quite at ease as far as the notions of religious morality are concerned, and could be beyond all doubt assured that everything further in his new venture would proceed "like a pianola".  There are two initial and specific points to be considered here;  first, if he were strictly adhering to the old Hermetic or true gnostic belief in the unity of everything and, second, if he had been following the admonition of his old grandmother to "not do as others do", it was quite in order for him to make this manifested "utterance" in this instance, for it is to be particularly noted that he uses this word and does not swear on the Trinity.  It is said that Sir Isaac Newton, now acknowledged as having had Hermetic understanding, once steadfastly refused to swear on the Christian Trinity when it was a requirement for his being ordained as a Fellow at Cambridge University; the reason for this would have been that as a true gnostic he well knew that the Trinity was part of the Christian myth.  Gurdjieff, therefore, in making such an "utterance" with, shall we say, "tongue-in-cheek", is, on the one hand, only appearing to conform with the usual religious morality of the time.  On the other hand, he is not going against his own convictions.  Further, he leaves a way open for his readers to look below the surface at a hidden meaning.

Worked into the third paragraph on the first page of this chapter is also a lesson in the art of positive thinking, for it is a fact that when beginning anything new, one should really be quite at ease and have the utter conviction beyond all doubt that everything will proceed, as is said, "like a pianola", for this instrument, if working correctly, plays the precise piece required.

He then begins to give us an account of these three specific data, the first of which became the chief directing lever of his entire wholeness.  This is the story of his grandmother who, when dying, enjoined him very emphatically to never in life do as others do - to do nothing or do something nobody else does.  Any woman in allegory represents reflective power, a function of the conscious mind not usually used - it is a force which is unnatural to us.  Even in the description of this little scene of his last talk with his grandmother, we are given the clue of reversal in the words right (subconscious) and left (conscious) - he "kissed the right hand", and note it is the left hand which is said to be dying, just as in allegory it should be, representing as it does the conscious mind.

Gurdjieff then gives a cameo description of a neophyte's first experience of the meditative process.  He paints a quaint picture of his getting into a bin (his own mind) where during Lent (a time of sacrifice), food for pigs is stored (this is the usual slush fed to the conscious mind);  in a different state of mind (brought about by his change of thinking, a reversal of thought) he is suddenly without food and drink (now denying the conscious mind its usual flood of thoughts) until the return from the cemetery (a place of the dead) of his mother (again, reflection) whose weeping (concentrated effort) at finding him gone and searching in vain (conscious mind temporarily cut off) "overwhelmed" him (first contact with a higher level is overpowering to the inexperienced neophyte and hence must be very brief).    He then emerges from the bin (comes out of his meditation) and standing first of all on the edge (the foggy state between conscious and subconscious) with outstretched hand, ran to her and clung to her skirts (conscious mind needing the comfort of being in its own familiar domain) stamping his feet (endeavouring to understand) and imitating the braying of a donkey (an old allegorical way of depicting the invocation of a "god").  Again we must note that a donkey (or ass) is mentioned and we are told it belonged to a bailiff (this being the watcher in the mind).  Always thereafter at "Shrovetide" he pondered upon this event. Shrovetide is the period of days before Ash-Wednesday, the first day of Lent, called so from the custom of sprinkling ashes on the head; this was his reminder of his first experience, for ash is a residue of fire, concentrated attention.  This little allegorical story aptly portrays the first realization of a neophyte that his mind has a dual aspect, and pictures the resulting turmoil of impressions which this brings.  He tells us that after this experience he then walked with his feet in the air (he has discovered and understood the art of reversal of thoughts) and must thereafter use his hands (this representing the method of working through the conscious mind using will-power) so that his level of understanding (now raised upwards through the soles of his feet) will increase.  See again how this story ties in with his mention of "sole" and "soul".  He goes on to tell us that on the fortieth day after the death of his grandmother, all the relatives gathered in the cemetery for a "requiem service".  The number forty, so often used in allegory, denotes a period of meditation, and does not necessarily mean an exact length of time;  in this instance, where a death is reported at the end of the forty days, Gurdjieff is completing his descriptive portrayal of the way the death of the conscious mind eventually occurs (for even all its relatives, or all its aspects, are in the cemetery) which thus releases the "soul", the subconscious.

GURDJIEFF AND THE ARCH PREPOSTEROUS, IS AN ATTEMPT TO DISCOVER GURDJIEFF'S AUTOBIOGRAPHY HIDDEN IN THE 'DESCENT' CHAPTERS OF HIS MASTERWORK, ALL AND EVERYTHING.

REVIEWS OF GURDJIEFF AND THE ARCH PREPOSTEROUS:

'While I usually flee complex allegorical, symbolical or mathematical approaches to Beelzebub, Ms. Lonsdale writes with such seriousness, consistency, knowledgeability within her chosen framework, and even some quality of enlightenment, that I find myself paying attention.'
Roger Lipsey

'This Australian author has studied Hermeticism, alchemy and the Gurdjieff work for many years. Her (book) is a brave and long overdue work which sets out to 'uncode' areas in Beelzebub that have remained hidden up until now. ...Each chapter successfully describes the Hermetic process in each of its stages. ...An aside: The late Dr Philip Groves gave this book the thumbs up.'
Claudette Vaughan

Joy Lonsdale spent much of her life studying the Hermetic Code and corresponding with experts in the field. She attended a Gurdjieff group for years and was later a member of the Rosicrucians. Her first book Gurdjieff and the Arch Preposterous is an interpretation of Gurdjieff's great allegory, All and Everything.. Her second book, Dictionary of Allegorical Words, is another Buzzword Books exclusive.


You will also be interested in this unique Gurdjieff source material:

Madame Ouspensky's talks to her pupils - 1945-1947 - never before published!
This book provides entirely new source material for the Gurdjieff Work. It is an authentic transcription of talks given by Madame Ouspensky to her group at Mendham, distilled from notes taken by her pupils at the time. ...more...