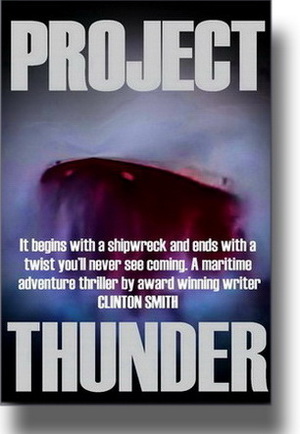 Project Thunder. When a device from outer space containing weather-controlling technology lands in the Australian desert, all nations want it for themselves.

A shipwreck in the North Sea. A terrifying journey in a life raft. A mysterious Russian ghost ship... This thriller never lets up.

John Black is a mercenary obsessed with discovering the secrets of the device which he and his father first found in the desert years ago. Scientist, Emma Farr, wants the thing given to the world and used to reverse global warming. The unlikely pair join forces. The action swirls across seas and continents until the pair finally discover the astonishing secret behind it all.

"This thriller never lets you go. A gripping and engaging romp with people you want to be with."
COMMISSIONING EDITOR, BUZZWORD BOOKS

"I finished Project Thunder yesterday. What a kicker of a surprise ending! After the expected tidal wave of bullets and blood, the denouement was perfect! I gasped aloud in admiration. I loved the book. It's tight, fast, brilliantly descriptive, with a plot as thick as clam chowder. Sincere thanks for a great read."
CHALLENGES ACCEPTED