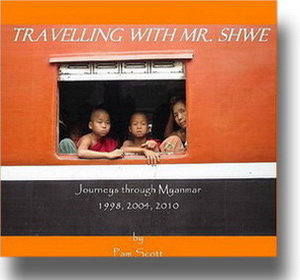 Essential reading about life on the inside. With 200 coloured photos.

This photo-packed account takes you beyond the pagodas and Buddha statues of Myanmar to show the life in Myanmar today rarely seen by outsiders. Pam Scott describes her journey:
'The recent 'relaxation' in Burma (Myanmar) and the resurgence of Aung San Suu Kyi has raised international awareness of the politics of that country. But beyond the headlines little is known about the people and the culture.
Travelling With Mr. Shwe is not a political story, although it is impossible to avoid some political/human rights issues. It is a human interest travel tale that I hope will give readers some knowledge about the country and its people and, maybe, cause them to care about its future.

Pam explains: 'This book tells of my first meeting with Mr. Shwe in 1998 and visits to Yangon, Mandalay, Lake Inle, Pyin U Lwin, Bagan, Mt Popa.

'In 2010, Mr. Shwe took me further afield to Rakhine State and the ancient city of Mrauk U, to the Chin State to meet the women with tattooed faces, and to the amazing new capital city of Naypyitaw, built recently by the ruling Generals.
'We returned to Mandalay to meet once again the irrepressible Moustache Brothers, before continuing north for twelve hours by train to stay in Kathar, the town which was George Orwell's last posting of his five years (1922-27) in the police force in Burma and the setting for his novel `Burmese Days`.
'Finally we headed south to Moulmein, the old British colonial capital for twenty-six years, once said to be the prettiest city in the country and on to the intriguing Ogre Island.'

If you want to know what it's like inside Burma, this book is essential reading . 160pp. 200 coloured photos. PDF only.