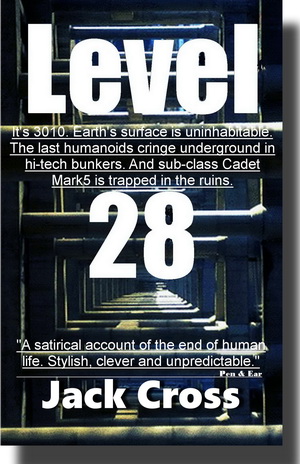 Level 28. In the year 3010, just before humans become extinct, the final few live underground like termites awaiting the inevitable end.

Mark5, a sub-class Cadet streamed to service women elders, will do anything to survive the collapsing infrastructure and carnage.

Those in the Western Alliance bunker have vastly increased their lifespan but reduced their population to 50 because they regard humans as intrinsically destructive. "We can't be cured, only culled."
The privileged 300+ years-old elders in this gerontocracy have been preserved at the physical age of eighty. They are maintained by robots and a eugenically streamed, short-lifespan humanoid underclass. To curb veniality further, they are obliged to live by three stringent edicts distilled from the behaviour of social insects—Conformity, Rigour and Utility.
As for the robots, the resident Futurist points out that if they reproduce themselves without the input of flawed humanity, their coding, flawed like its creators, must degrade. The robots in the Russian bunker know this well as their humans have all died. So they plot to abduct the last human coders from the Alliance then destroy it.
(76,000 words)

"This  mind-twisting tale uses the dystopian SF genre to compare the life of an individual with the birth and decay of civilizations.  It dramatizes levels of human consciousness, indicates how to augment them and shows why artificial intelligence can never achieve autonomy. Civilization ends, not with a bang or whimper but with the worst crime against Conformity. A laugh! Highly recommended."
Commissioning Editor, Buzzword Books

Read a chapter below:

His pass-out ceremony was not as he expected. There was no grand assembly with others. It was momentary—a model of Utility.
Lieutenant Mutia, the Hubot8 Corps supervisor of Sexuality and Deviance, confronted him in the main tunnel. 'Attention, Mark5!'
He stiffened, saluted, eyeing the nipples outlined by her cling top uniform. Her small uptilted breasts were the latest style. Not to look would have been impertinent.
'At ease.' She'd noticed his glance—Hubots noticed everything—and confirmed it with a whiff of musk. 'You are to graduate now. Fall in.' With the jigging walk that emphasized her neatly moulded arse, she led him past the distorting walls:

Individual freedom is forbidden.
All sub-class organics will be sterilized.
Sub-class pop limit is 2000.

They reached the portal of the Sanctum—an area used only for pass-outs. They entered a domed, lozenge shaped space lined with blindingly brilliant gold leaf. Recessed shrines at each end enclosed backlit naked statues of elders. A man in one. A fem in the other.
She led him to the twice-life-sized sculpture of the imposing naked fem. Deep-lined but still beautiful face, long thin legs, spare flanks and sunken breasts. They knelt on the plush cushion in front of it.
'Begin,' Mutia ordered.
He called up the Invocation from Integritas Femina on his mind screen and recited it:

Enchantress of the Third Age.
Repository of carnal joy,
I dedicate my lust to your practiced flesh.
Kiss your knowing eyes,
Fill the sepulchre of your thighs.

It went on for twenty mawkish lines. As the words began, the bronze sculpture softened and started to move. It sensually gyrated and finally squatted to display the slack flesh of its vulva. As the liturgy ended, it resumed its first pose and re-solidified—became as imposing and resplendent as it had been before the invocation.
'Well done, M5.' Mutia favoured him with a second whiff of musk and replaced his cadet flashes with twinkling trooper insignias. 'You are now a Trooper Class One. Congratulations. Your mission begins.'
He didn't know whether to thank her. Should one thank a machine? Since his parthenogenesis—his extraction from ectogen fluids fertilized from sperm taken from the Sex Corps Masturborium—there had been no role model except her. Just pedi-Mechs that his infant mind had forgotten, the Kindie-Bots who'd herded them in batches and the Mech Cub minders with their painful prods. Unlike the sophisticated Hubots, Mechs had only basic responses. So, since he'd joined the Corps at ten, she was the nearest thing he'd had to a mentor.
'Dear Tutor, do graduates come back here for reunions?'
'Negative.'
'So I'll... never see you again?'
'Unlikely.'
He felt he was losing a mentor and friend. Wanted to prolong the moment. Felt more should be said. 'Is there any advice you can give me?'
'You have twenty-two years left. Do not waste them.' She held out her hand and he shook it, feeling the same poly-smooth skin he'd cut up in the wrecking bay. Her shake was too precise to be organic and, in this silent, hallowed space, he heard the faint seductive whine of her servo-powered hydraulics.
He said, 'Perhaps I'll recyc you one day-slot?'
'Sentimentality! Remem, all emotions lie—lack Rigour, Utility and Conformity. You will not recyc me as your time at Disassembly is over. You are being assigned to Promass—a more responsible position. You leave tomorrow-slot at 0900.'
'Well... Well... thanks for your help over the year-slots.'
Her imperturbable expression matched his. 'You are smart, unit M5. You comply—which demonstrates Utility and Conformity. Continue to conform. You will go far.'
He had the urge to hug her. But that would have lacked Utility.

"A gerontophilic sex slave is upgraded to Conditioning Sector, then Inhuman Resources as he fights to stay alive in a collapsing hi-tech regime. This bizarre dramatization of the fag end of civilization is stylish, clever and unpredictable ."  PEN & EAR

REVIEWS OF THE LOGOS PROBE:


"A family saga set in 2080 with a load of real science added in. I loved the way the down-at-heel journalist was sucked into the corridors of power. And his progressive horror at what he found there. Beautifully written, by the way and with a theme to make you think."
MOVING FINGER REVIEW

"Science Fiction has always been better at predicting the future than futurists and this believable dystopia could easily be what is ahead. Highly recommended."
D. S. MILLS. BUZZWORD BOOKS

Jack Cross is a science journalist and futurist. Level 28 is both trenchant social commentary and a warning of things to come. Here is informed speculation in the form of a thoughtful, fascinating and highly accomplished novel.